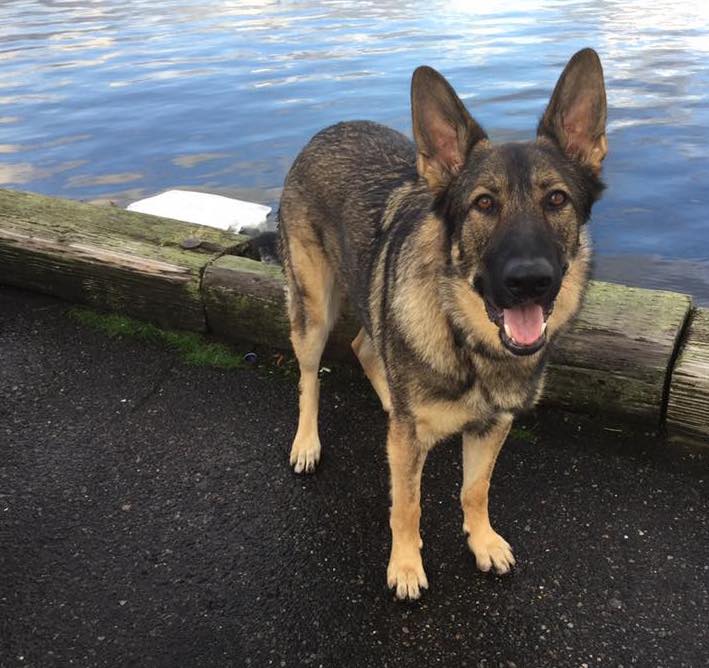 The German Shepherd first appeared in Germany in the 1880s, first bred by a German calvary officer by the name of Max von Stephanitz. Initially used for herding, this versatile breed has adapted well to police and military work, search and rescue, tracking, bomb detection, and protection work.

The German Shepherd stands 22 to 26 inches at the shoulder and weighs between 60 to 110 pounds. It has a strong, muscular body and a medium length, course shedding coat with a soft undercoat, which needs to be brushed daily. The color may be black, black and tan, red and black, golden with black tipped hairs or gray with black tipped hairs. Also, the GSD may be all white. (This is discouraged by breeders/AKC.)

The German Shepherd is a large dog that is in fact one of the most versatile breeds. It is strong, agile, loyal, highly intelligent, and possesses one of the keenest noses in the dog world. The German Shepherd is courageous, very territorial and will instinctively protect its home. It tends to be suspicious of strangers until its owner accepts the person or persons into their home. The Shepherd becomes TRULY BONDED TO ITS FAMILY, and consequently can suffer from separation anxiety when apart from its people. If boarded for a length of time, it can become depressed, may refuse to eat, and can lose an appreciable amount of weight.

This breed makes a great family pet when properly trained, and will love and protect your children almost to a fault. It can be suspicious of your children’s friends, which could lead to a biting incident if the child shows fear or flight. The Shepherd may want to chase cars, bikes, or joggers and may be dog-aggressive.

It is essential to train and socialize a Shepherd with people and other dogs. Training is not always easy with a Shepherd; it is so intelligent that it will think of ways to avoid doing what you ask of it. The most intelligent of breeds, contrary to popular belief, are NOT the easiest to train. The opposite is often true.

The German Shepherd is extremely perceptive. It is acutely aware of its owner’s moods or any change in its environment, however slight. Socialization, therefore, must be extensive and must cover as many different situations as possible. Failure to do this may result in an unexpected aggressive or fearful response to certain people or places.

The German Shepherd, because of its great popularity, has been over-bred. We see many poor-quality, flighty American-bred Shepherds with behavioral and structural problems. Many suffer from hip dysplasia, shoulder problems and panosteitis (an inflammation of the growth plates of the bones, which can be aggravated by keeping a Shepherd puppy on a high protein puppy food diet, causing too rapid growth). Breeders who supplement their bloodlines with imported German stock tend to produce more active, stable, structurally sound dogs. DO NOT BUY A GERMAN SHEPHERD FROM A PET STORE!

A house with a secluded fenced yard is essential (at least 6 feet). The owner of a German Shepherd should be a strong, confident, emotionally secure leader who desires a smart, protective, athletic dog. This is NOT a breed for an insecure or immature person. The Shepherd is very sensitive and will reflect the mood and emotions of its owner.

Do not let a Shepherd assert itself against you or achieve dominance in any venue. It will quickly take charge if you spoil or placate it. Allow this and you open yourself to aggression problems.

Children are okay, providing no roughhousing or chase games are permitted. Young children should ALWAYS be with an adult and NEVER left unattended with ANY dog.

Daily exercise is mandatory. Obedience, Herding, Retrieving or Agility work will direct the Shepherd’s energy and build its confidence.

Time to train, exercise and socialize this active, intelligent, dog MUST be available.

Information taken from the book, Choosing a Dog, by Nancy Baer and Steve Duno.